Worm Gear Screw Jack systems are ruggedly designed and produced in standard models with load handling capacities from 1/4 ton to 100 tons with no “standard” travel lengths (built to specification). The housings are made of ductile iron and proportioned to support the rated capacity of the unit. Use individually or in multiple arrangements.

An alloy steel worm which drives a high strength bronze worm gear (drive sleeve). The worm shaft is supported on anti-friction tapered roller bearings with external seals provided to prevent loss of lubrication . The drive sleeve is supported on anti-friction tapered roller or ball thrust bearings. Rotation of the drive sleeve causes the lifting screw to translate or rotate, depending upon jack configuration.

Thanks to the worm gear with balls fitted between the screw and the nut, ball screws are specifically applied in such cases where the velocity of the movement as well as high precision positioning form the basic pillars of the application. 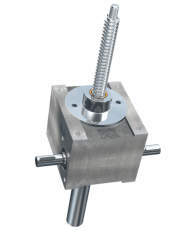 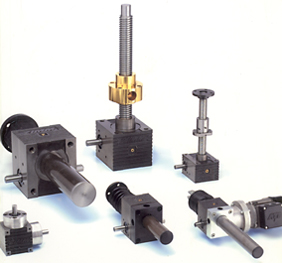 What is the use of screw jack?
A jackscrew, or screw jack, is a type of jack that is operated by turning a leadscrew. It is commonly used to lift moderately heavy weights, such as vehicles; to raise and lower the horizontal stabilizers of aircraft; and as adjustable supports for heavy loads, such as the foundations of houses.

How many types of screw jacks are there?

3
There are 3 main types of screw jacks: machine/worm gear screw jacks, ball screw jacks, and bevel gear jacks. Within these, there are 3 subcategories related to the mode of operation: Translating, Keyed, and Rotating/Traveling nut.

What is simple screw jack?

A screw jack is a simple machine. It is used to lift cars or heavy automobiles. It consists of a long screw rod which passes through a threaded block B and a handle . The distance between two consecutive thread is known as pitch of screw.

Who invented the screw jack?

What is mechanical screw jack?

A Screw Jack (also known as a Jack Screw, a Worm Screw Jack, a Machine Screw Jack or a Lead Screw Jack) is a devise used to convert rotational motion into linear motion. … It utilises the property of a screw thread providing a mechanical advantage i.e. it can be used to amplify force.

How does a screw bottle jack work?

The screw version of the bottle jack works by turning a large nut running on the threaded vertical ram at the neck of the body. The nut has gear teeth and is turned by a bevel gear spigotted to the body, the bevel gear being turned manually by a jack handle fitting into a square socket.